Two mature aged people who love travelling and learning along the way... Our names are Rob (Robyn) & darian in the 60+ vintage of travellers keen to visit parts of the world which will stretch us mentally, physically and emotionally.

For a few years we had been keen to try and see one of the more elusive large cats on the planet, jaguars.

This desire motivated us to include a trip to a more remote area in Brazil called the Pantanal; it is the world’s largest tropical wetland, covering over 181,300 square kms— right in the centre of South America.


Brazil can lay claim to most of the region, but the Pantanal spills into neighbouring Paraguay and Bolivia and though the Amazon rain forest to its north is more well known, the Pantanal quietly boasts the highest concentration of wildlife on the continent.

After the wet season (Dec to early April), the Pantanal becomes a massive wetland filled with lots of wildlife and as the waters drain the bird numbers reduce through migration and the numbers of marsupials and mammals increase, including jaguars.  The Pantanal is also home to the green anaconda… the largest snake in the world.

Our original itinerary was planned in conjunction with a local company Wild Pantanal Safaris had us travelling deeper into the Pantanal along the mainly dirt Transpantaneira Highway.
We were meant to stay at a more rustic lodge at the end of the highway for 4 days/3 nights, specifically to search for jaguars.

Jaguars are the dominant predator weighing up to 136 kg in weight and whose prey includes caiman, which are similar to but smaller than crocodiles, captured by leaping off the bank into the water, crushing their throat or skulls and dragging them back out onto land.

Unfortunately for us, late and unseasonal heavy rains flooded the rougher and final sections of the road and areas around the lodge and leading to the jaguars moving north and away from this area.

This meant a rapid change of itinerary only a week out from our arrival.  We were naturally disappointed, but the Pantanal had plenty of other wildlife to search for.

We had to reach a city called Cuiabá and after travelling from Rio via Sao Paulo where whilst waiting for the flight to Cuiabá, Rob decided to use the airport toilet, only for its door to fall off its hinges.  She caught and handed it to the attendant as she left, much to that lady’s bemusement.
At 7am next morning we were heading into the Pantanal with Jon our driver and guide Flavio, an indigenous Amazon Brazilian with a lot of stories to share and things to teach us.

The new itinerary had us staying in one lodge for 2 nights and another, deeper into the Pantanal for 1 and over the next 4 days it was non stop wildlife searching, including during our drive along the ‘highway’ to and from lodges.

There was an upside to the late rains… birds, lots and lots of birds and it wasn’t long before we were seeing some familiar ones like the kingfishers but also a mass of new ones.

It was both hot and humid in the Pantanal, but that didn’t deter Flavio having us out searching for wildlife within 30 mins of checking into the first lodge and soon found ourselves standing right next to a 2m caiman sunning itself on land.

So for our entire time in the Pantanal we were either doing pre-sunrise walks into the forest, day and night drives or boat drives and there was plenty to see as the photos that follow will show.

At both lodges there was also plenty of evidence of the presence of our elusive quarry in the form of very fresh tracks of jaguars, at the first lodge a mother and cubs and at the second lodge a large male.
Flavio constantly amazed us by both his shared stories and his ability to spot animals either during the day or night, for example during our pre-dawn walk in the jungle and just after the sunrise, he found a porcupine sleeping at the top of a tree!
The staff in both lodges were very warm, friendly and despite our lack of Portuguese, made us feel very welcomed indeed. The food was plentiful and good, especially the piranha soup. 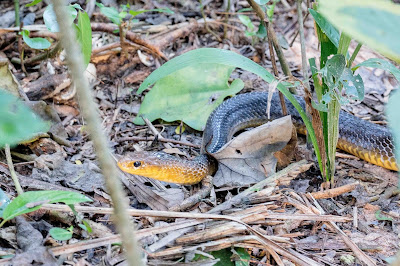 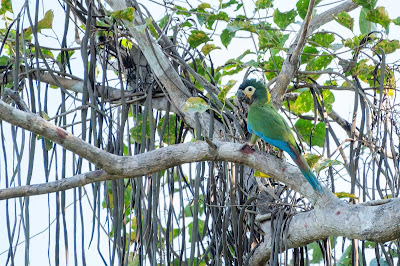 Click on this link - More photos in the Pantanal

During one boat ride we even went fishing for piranha and yes I did take one off the hook, much to Flavio’s concern, especially when you see their teeth.
A jumping caiman called Lucy who swam up so close to our boat Rob was warned to keep her hands away from the side.  The fish she jumped for was piranha!
Another piranha was thrown into the water for a hawk to swoop down and grab, which was another surprise for us.
During 2 night drives Flavio found pygmy owls hiding in trees, crab eating foxes, including 2 young ones following and harassing a caiman walking down the highway, something Flavio had not seen before.
We also managed to see 2 giant anteaters that appeared out of the bushes on to the road briefly before again returning.
In only 4 days and despite only seeing jaguar tracks, we achieved much during our time in the Pantanal, again due to the skills and attention of both Flavio and Jon.

Thank you Wild Pantanal Safaris for a fabulous time and perhaps one day we will return to the Pantanal to finally see the elusive jaguar.